Welcome back from, what I hope was a fantastic holiday.

In English we will be studying Holes by Louis Sachar. This will involve narrative writing, letters and balanced arguments.

We will also be studying the text Gangsta Granny by David Walliams. We will be learning about a variety of literary genres including newspaper reports and narrative stories.

In science this half term we will be studying Materials. This will include classifying materials according to their properties and also looking at ways in which we can change materials.

Here are some of the amazing costumes from the day.

In English we will be studying the book Cosmic by Frank Cotterill Boyce. We will be focussing on the imagery of space and writing poems and playscripts.

For English week we will be studying Charlie and the Chocolate Factory. We will be learning about the life of Roald Dahl and designing rooms for the factory and chocolate bars. We will also be doing some drama based on the text.

On 2nd February the school had a Maths Day to raise money for the NSPCC. We did a range of maths activities across the year group. The children wore clothes with numbers.

On the first two days back after Christmas the children took part in Science activities.

This half term we will be learning about The Story of London. This will include making our own persuasive brochure about a London landmark.

We will also be studying the book The Varmints and writing a story based on it.

Our Autumn 2 Learning
In English we will be reading Stormbreaker by Anthony Horowitz. We will be writing non-chronological reports and the children will be designing gadgets and writing instructions on how to use them.
Our Autumn Learning

In English we will be using the text Gangsta Granny by David Walliams. We will be learning about a variety of literary genres including newspaper reports and narrative stories.

The year 5 classes have been on n educational visit to the Ragged School Museum in Bethnal Green. The school was originally set up by Doctor Barnardo to give an education to poor Victorian children. The children had a lesson with a 'Victorian' teacher and learned about some of the household items that would have been used in Victorian times.

As part of our Black History Month celebrations we had a visit from the poet Valerie Bloom. Valerie performed some of her poems for the children and took some questions from her audience. 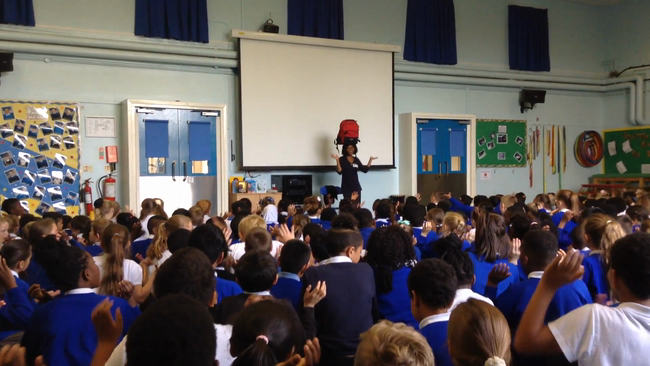 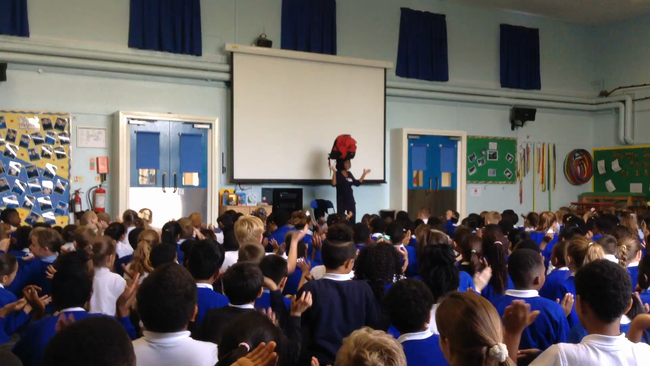 Similarly to SPaG, children completed a previous Arithmetic SATs before half term. This half term, they will be covering areas that have been identified as areas to improve and then they will have the opportunity to implement the skills learnt in Reasoning.

They will be manly focusing on the 4 operations (addition, subtraction, multiplication and division) as well as finding percentages of numbers and using the 4 operations in fractions. There will also be a focus on the use data handling in Maths and finding angles in shapes.

Before half term, children completed a previous SPaG SATs test. English this half term will cover areas that have been identified as areas to improve. Children will be revising key areas of SPaG and making sure that they can include the topics taught in their English writing.

During one afternoon session each week, children will be continuing to develop their knowledge of the Mathematical operations learnt during the morning sessions.

In Science this half term, children will be developing an understanding of how forces including gravitational attraction and drag forces – friction, air resistance, water resistance, and upthrust in water – affect movement. Children learn how mechanisms including levers, pulleys and gears allow a smaller force to have a greater effect, and they use this knowledge in different investigations.

They will be using each book to take the roles of characters and they will develop their own stories based on these.

Spring 2 is also host to World Book Day where children will be able to dress up as their favourite characters from novels. During this week, they will be using the book, Cosmic, to write and study space-themed poems.

During the week of 27th February, children took part in English Week. The trip to the British Library was part of this as well as World Book Day.

During the British Library trip, children had the chance to explore different exhibits within the library and take part in a workshop where they created their own books (see pictures below).

On 2nd March, World Book Day gave the children the opportunity to dress as their favourite characters' from novels. There were some amazing costumes and it was clear that a lot of effort had gone into them (see pictures below).

This term, children will be focusing on the relationships between fractions, decimals and percentages. They will be making sure they have knowledge of the following:

- recognising and using thousandths and relate them to tenths, hundredths and decimal equivalents.

- recognising the per cent symbol (%) and understand that per cent relates to ‘number of parts per hundred’.

- reading, writing, ordering and comparing numbers with up to three decimal places.

As well as this, children will be testing their knowledge of the 4 operations (add, subtract, divide and multiply) to answer word problems and investigations related to the English book Cosmic during English Week. Can they help solve the investigation to who stole the vital parts of the ship?

In English this half term, children will be focusing on the information text ‘The Story of London’ by Richard Brassey.

With the help of this book, children will be writing their own information texts about London. To do this, they will research famous landmarks around London by making notes and then using them to re-write a text.

Whilst researching the landmarks, children will be writing their own tripadvisor reviews giving their opinion of the landmarks and advising people on why they should visit them.

This term, children will be focusing on the relationships between fractions, decimals and percentages. They will be making sure they have knowledge of the following:

· comparing and ordering fractions whose denominators are all multiples of the same number.

· adding and subtracting fractions with the same denominator and multiples of the same number.

· identifying, naming and writing equivalent fractions of a given fraction, represented visually, including tenths and hundredths.

· recognising mixed numbers and improper fractions and converting from one form to the other and writing mathematical statements > 1 as a mixed number.

During Maths week, Year 5 used their English lessons and afternoons to create a board game and Maths Dictionaries for Year 3 to play. They had to, first, create a dictionary using Mathematical terms. Then they had to design and make a game based on the dictionary and finally they had to write a set of instructions that were easy to read for the children in Year 3.

Don't forget to keep going on Mathletics and earning the most points for Year 5. We want to beat all of the other Year Groups in school.

The Great, The Bold and The Brave

Our IPC topic this half term is “The Great, The Bold and The Brave”.

During this topic, the children will be learning about the great civilisations of Ancient Greece and Rome.

We will be learning about some of the great buildings in these civilisations and the rivalry between Athens and Sparta, with reference to the history of the Olympic Games.

In Maths this half term, children will be consolidating their knowledge of multiplication and division, by using both mental and written methods. They will be learning about the relationships between different multiplication tables and devising facts from them.

During written multiplication and division, children will be learning new methods to solve problems with an increasing range of difficulties. They will be using short multiplication, long multiplication, short division and long division.

They will also be studying shape, geometry and angles. Children will have the opportunity to develop their reasoning skills by explaining why they have given an answer for a question.

Remember to continue working hard on Mathletics. Year 5 are currently the number 1 year group at William Bellamy. Let’s keep it up!!

Want to focus on one factor at a time?

In English, we will be covering 2 main topics. Firstly, we will be completing a range of learning about the book Fungus the Bogeyman. Children will write a recount about a day in the life of Fungus and they will be writing a Non-chronological Report about Bogeydom (the place where Fungus lives).

The next topic they will be covering, will be websites and blogs. During this topic they will be designing their own website and taking part in a range of P4C lessons that cover issues around anti-bullying (anti bullying week is 14th November)

Please make sure you are encouraging your child to complete the tasks teachers will be setting on Mathletics (link below). All tasks set will be linked to the children's learning in that specific week.

Remember to help your child complete their spelling journals and reading logs on a daily basis. Spelling tests are on Friday.

During English this year we will be focusing on a range of different texts. This half term we have read a book called The Promise and children have had the chance to write narrative poems based on the different parts of the book.

EXAMPLES TO BE ADDED!

more recently we have had the chance to write our own horror stories, once again using the book to help us generate our ideas.

EXAMPLES TO BE ADDED!

We have an amazing opportunity for parents, children, grandparents, brothers, sisters, aunties, uncles, friends and pets to show their creative side. In relation to our topic this half term we are asking children, with the help of whoever they wish, to build a model of our solar system (the Milky Way). Please see below some examples of how to make the solar system. The bigger the better. All models will be displayed in classes and around school.

How to make a simple 3D Solar system

Styrofoam ,wooden sticks and some acrylic colors Good for schools :)